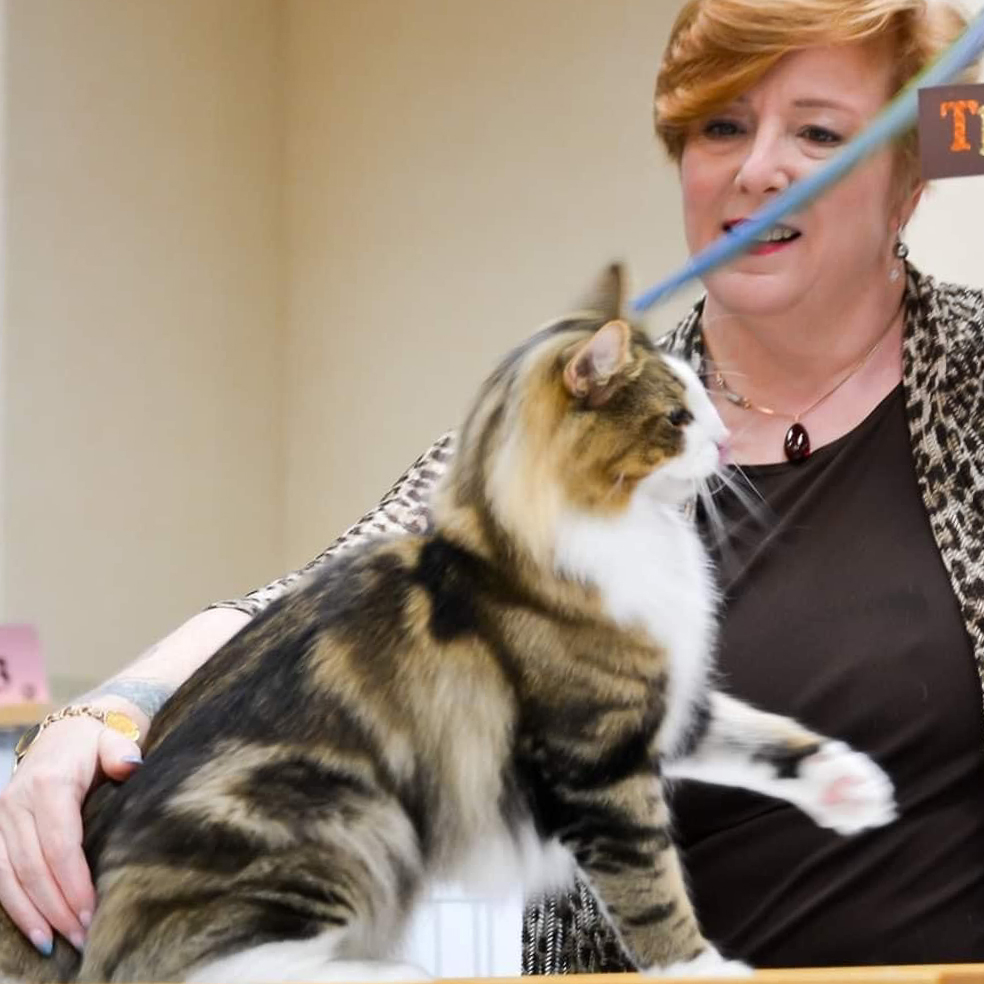 Jacqui has been in love with animals for as long as she can remember with a childhood filled with furry Friends.  Her adult genesis with the cat fancy began over 20 years ago with Ocicats. She and her son traveled the US to shows as he grew up a true “show hall kid” raised by the CFA family.  While she has raised and exhibited a number of breeds, Ocicats are her first love and she is very proud of her accomplishments within the Ocicat breed becoming the breeder of the first ever Tawny breed winner and first ever Cinnamon national winner.  She served as Breed Council Secretary for 6 years and has been a CFA judge for 10.  She currently serv es CFA has the Committee Chair of the Breeds and Standards Committee.  A group dedicated to serving the breed councils and CFA to preserve and maintain our Breed Standards as well as help facilitate the recognition of new breeds within CFA.

She currently lives in Buford Ga with her husband David and her furry family.  “Being a judge is one of the greatest honors of my life” says Jacqui. “Every cat I am given the privilege of handling has a glory and beauty that it is my honor to be able to evaluate and present!  I never forgot that each cat I handle is someone’s beloved treasure.” 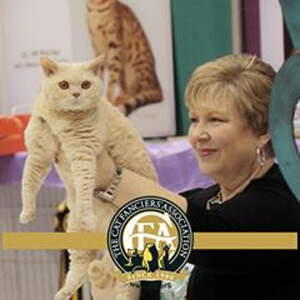 Kathy purchased her first pedigree cat, a Maine Coon, in 1990, began exhibiting that same year, and began breeding in 1991. She has worked with a variety of breeds in addition to Maine Coons: Somalis, Norwegian Forest Cats, Japanese Bobtails, Orientals, Siamese, Chartreux, and Persians.

A CFA judge since 2001, Kathy has also served CFA in several other capacities. She has been the Somali Breed Council Secretary, was one of the founding members of the Youth Feline Education Program (Jr. Showmanship), and has mentored many new breeders and exhibitors. “Judging has brought me opportunities to visit many countries and see the expansion of CFA into many new areas,” she says.

In addition, Kathy served as Regional Director for the Gulf Shore Region 2016-2020, Chairperson for the CFA Marketing Committee, and is currently Chairperson for the Mentorship/Newbee programs, and Chairperson for Companion Cat World. When not involved with her CFA activities, Kathy sells life and health insurance, likes to garden (particularly with daylilies), plays the piano and reads. 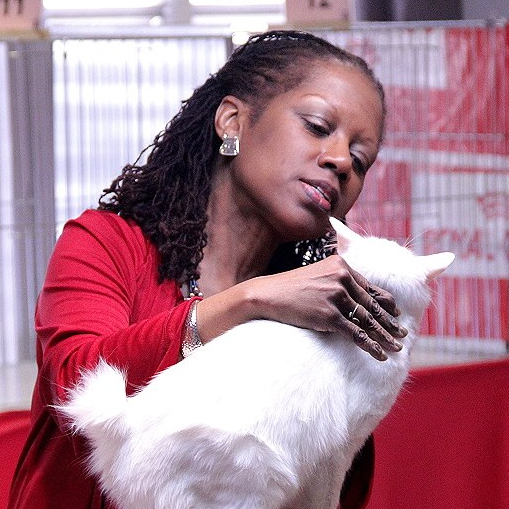 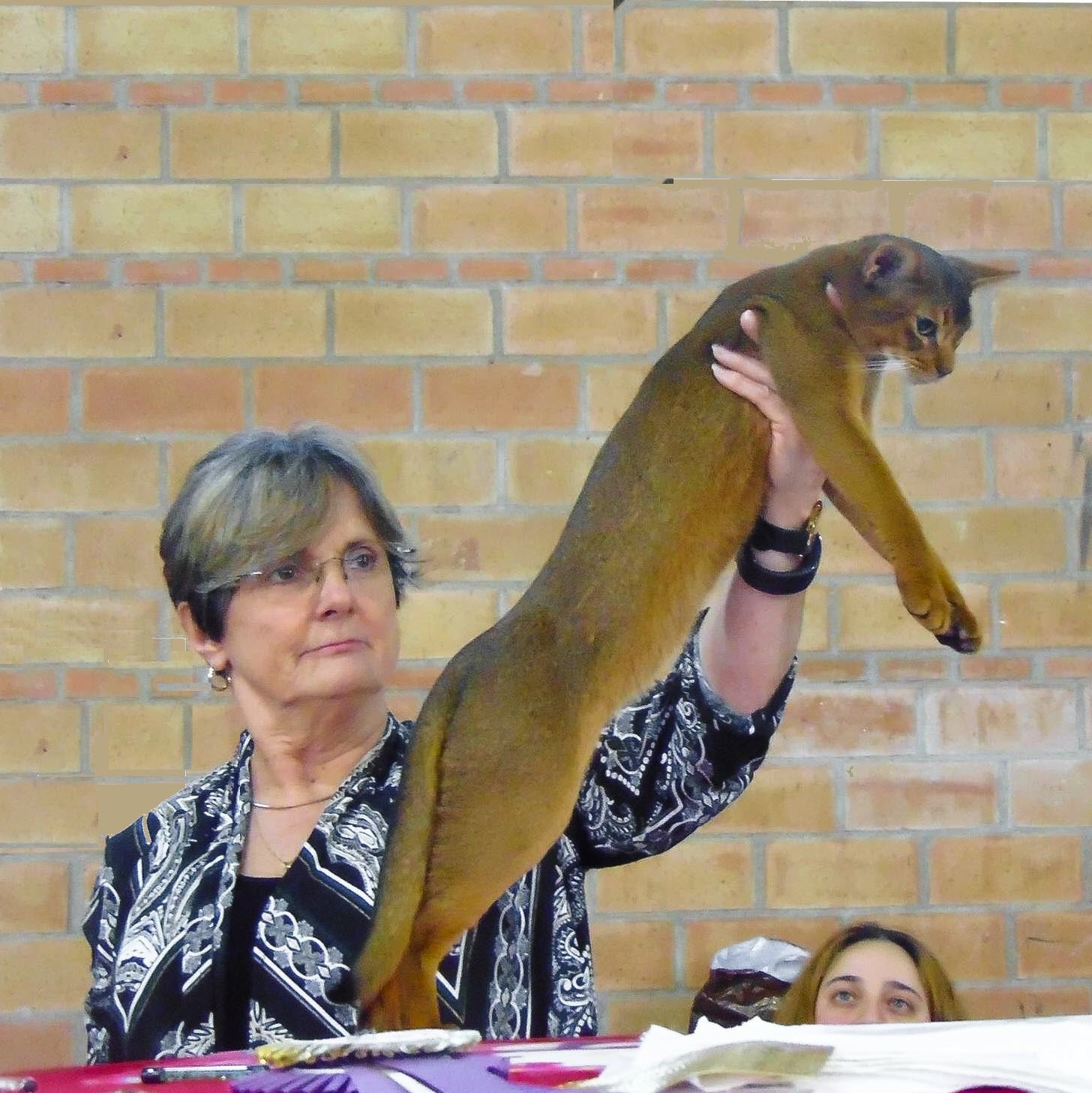 Born and raised in Quincy, Illinois, Pam spent a major portion of her adult life in San Antonio, Texas, where she served in the U.S. Army for 24 years. She now lives in Tampere, Finland with her wife Satu Hämäläinen, a judge for FIFe (Fédération Internationale Féline).

Pam became a CFA judge in 1990 and now has more than 30 years of CFA judging experience. She is a former President of CFA and was recently elected Regional Director of CFA’s Region 9, Europe.

She began showing with Himalayan Persians in premiership but fell in love with a lynx point Colorpoint Shorthair and then ended up breeding Siamese for over 20 years.  She has also bred Singapuras and Maine Coon Cats, and currently works with Norwegian Forest Cats and American Curls. She considers cats “beautiful works of living art” and is addicted to traveling the world and connecting with cat fanciers everywhere, because “no matter our political differences, geographical considerations, language differences, we all share the same passion and that is CATS.” 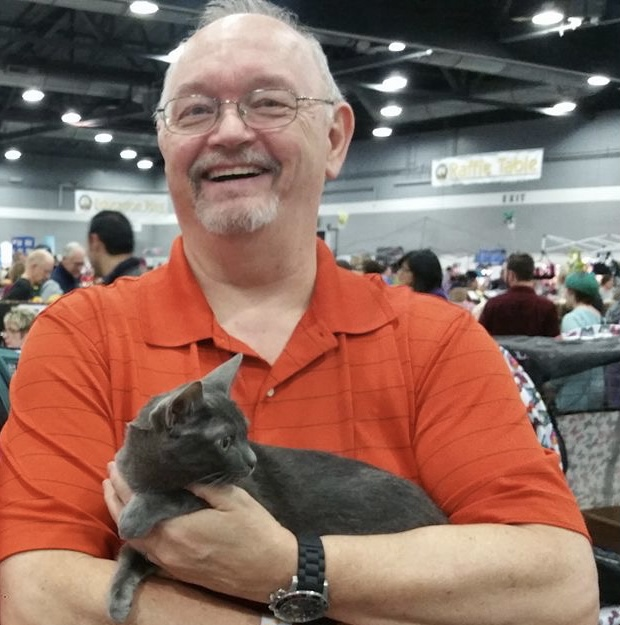 Born into a military family in San Diego, Dennis has lived in Oregon since high school. He caught the “show bug” shortly after his discharge from the US Marine Corps, when a friend asked him to help show her Burmese. Once settled into civilian life, he decided to acquire one of his favorite breeds—a Korat—and start showing himself. He met Judy Buckle at a show in Portland and purchased his first Korat from her.  She has now been Judy Buckle-Ganoe for almost 31 years.

Still active with his Korat breeding program, Dennis has also bred Persians and Maine Coons and exhibited a wide variety of other breeds. He fell in love with LaPerms when they were first exhibited in 1992 and is currently the LaPerm Breed Council Secretary. He has been a CFA judge since 2001, and treasures his judging experiences, “handling the pinnacle of feline excellence while meeting fellow fanciers along the way.” Dennis has also served on the CFA Board of Directors, and drew on his professional expertise as a Software Quality Assurance Engineer when involved in the upgrade of the Central Office computer systems.

When not involved with cats or work, Dennis can usually be found engaged in some form of physical activity. He lifts weights, is an avid Cross-Fit enthusiast, and comments that remaining active has done wonders for his health and well-being. 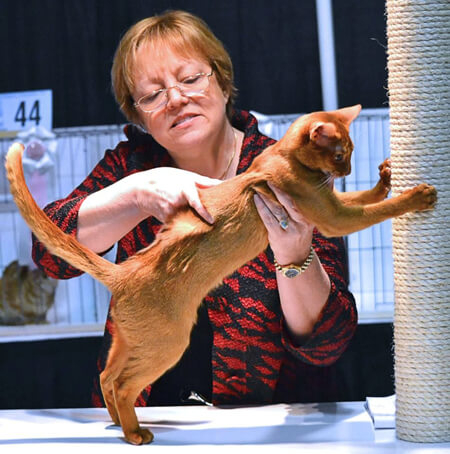 Born and raised in New Orleans, Louisiana, Karen inherited her love of all animals from her father. Karen owned, bred and raised American Quarter Horses for almost 25 years, travelling throughout the United States to compete in weekend shows, circuits and futurities with her horses. In the late 1990’s, she began keeping her horses in Kentucky and then Oklahoma, only to discover she now had a lot of extra time on her hands. In February of 2000, Karen attended her first cat show as a spectator. The beauty of the various breeds was so intriguing that Karen set out to find a pedigreed cat of her own. In the process, she ran across a photograph of a Russian blue that she remarked was “the most beautiful cat she had ever seen.” Karen ended up obtaining a kitten out of the girl whose photograph she admired. She began showing and breeding Russian blues in 2000-2001 show season under the cattery name of Czarcatz. Within the first three years of breeding Russian blues, Karen had bred two CFA National winners, and her cattery went on to produce numerous CFA Grand Champions, Grand Premiers, Regional winners and Distinguished Merit cats. In 2004, Karen fell in love with another blue cat, the Chartreux. Her first Chartreux, a neuter, competed in the 2005-2006 show season, obtaining a CFA National win in premiership. Karen went on to breed and show Chartreux under the cattery name of Jewllz, producing CFA Grand Champions, Regional winners and a Breed Winner. Karen also spent a short period of time breeding Ocicats, and although she has great admiration for the breed, she did not continue further.

Karen became interested early on in becoming a CFA Judge, and began showing other breeds, alongside her Russian blue and Chartreux, in pursuit of that goal. She showed a Persian (2003-2004), an Ocicat (2004-2005), a Siamese (2006-2007), a Manx (2009-2010) and a Maine Coon (2011-2012) to CFA Regional wins, and an Egyptian Mau (2007-2008) and an Exotic (2012-2013) to CFA National wins, in addition to showing and granding an Abyssinian (2006-2007) and a Turkish Angora (2013) and agenting several other breeds. Her interest in showing other breeds to their fullest capabilities was never-ending and helped her more fully gain insight to these breeds. Karen joined the CFA Judging Program in 2011, and has had judging assignments throughout the United States, in Europe, and throughout Asia and Australia.

Outside of the cat fancy, Karen is winding down a 35+ year career in the practice of law and volunteers her time as a Court-Appointed Special Advocate (CASA) for children in foster care. She also teaches reading to first through third graders at the local public schools. 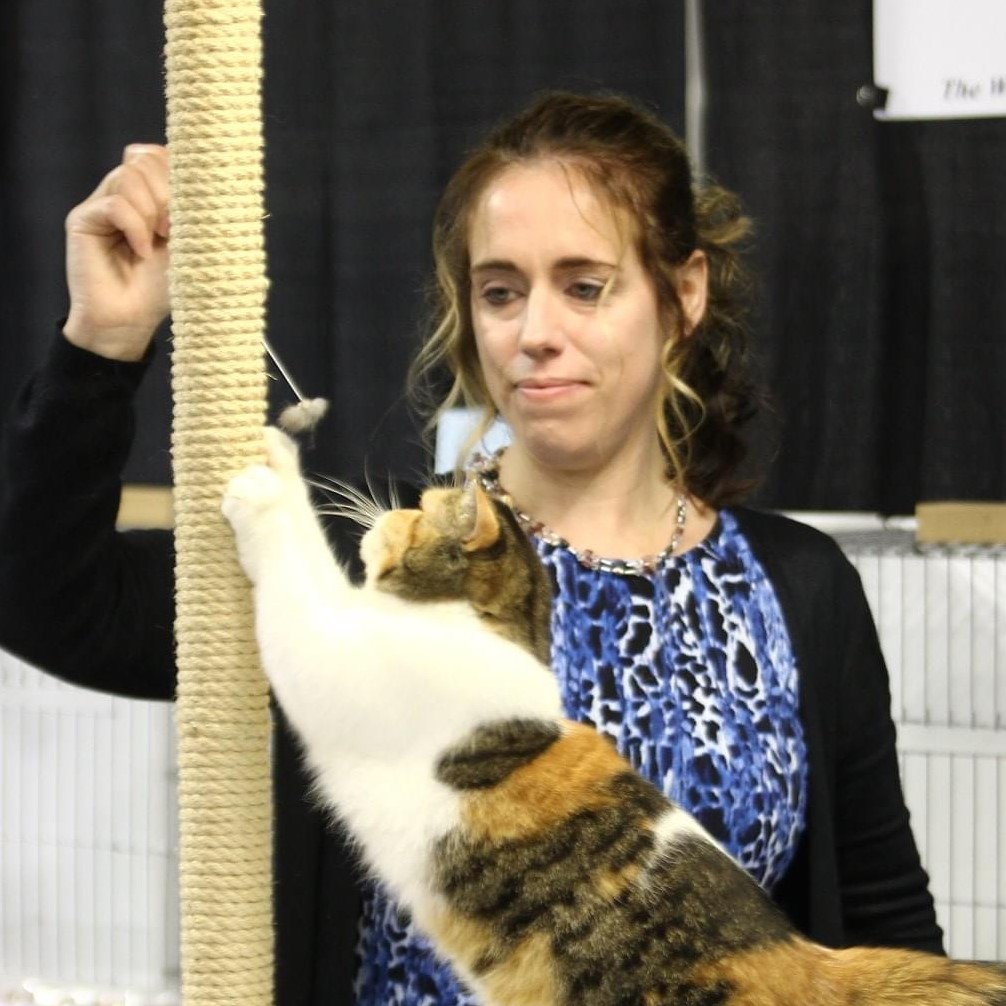 Born in Scranton, Pennsylvania, Doreann has spent most of her life in southeastern Connecticut, where she currently lives. She has been hooked on cat shows and the idea of judging them since attending her first show at the tender age of 9. Initially, she showed household pets, but acquired her first Persian in 1986 and registered her first litter in 1988. She bred white, brown tabby, and creams before deciding that silvers were her true love among Persians.

In 2001, Doreann started a Turkish Angora breeding program and began to focus her efforts on the judging program. She was admitted as a Longhair Trainee in 2010 and showed Selkirk Rex, Orientals, and Bombays while working on her shorthairs. With a background in the arts, “I judge cats like a three dimensional living piece of art,” she says, “focusing on the size, symmetry and shape of each part of the cat as well as how it follows with the rest of the body, based on the written standards.” She finds it especially rewarding to work with kittens and timid cats at their first shows, helping them build confidence with gentle handling. She also enjoys traveling and connecting with new friends who share the same passion for cats.

Outside of the cat fancy, Doreann is a multifaceted entrepreneur involved with electrical construction, commercial real estate, and horse farming. She also has a cat grooming business with loyal clients who drive from hours away to have her beautify their babies. When not judging or working, she enjoys a variety of adventurous pursuits, including flying, scuba diving, snowmobiling, jet skis, surfing, horseback riding and competitive equine event. 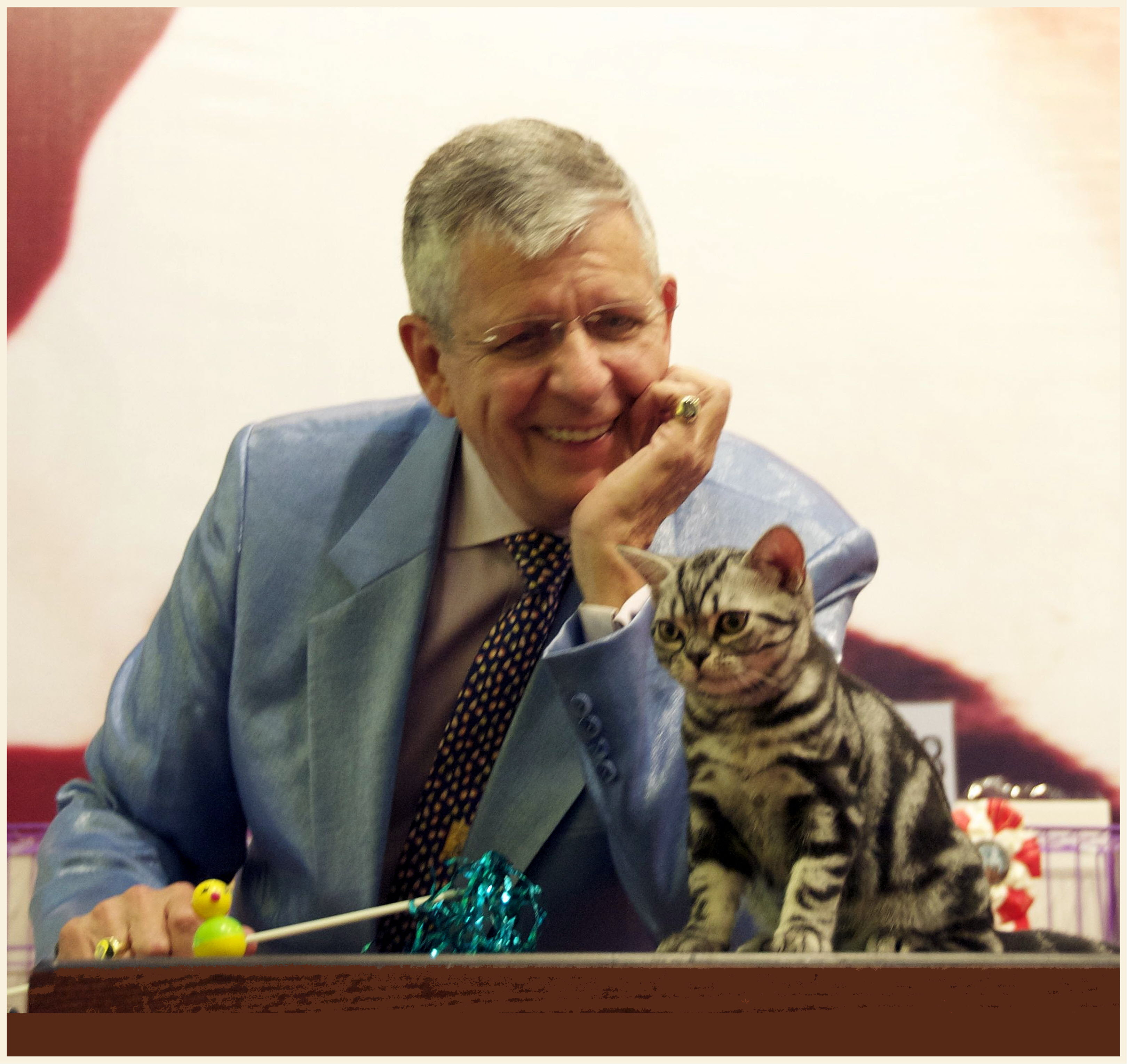 Bob has been judging pedigreed cats for over 50 years, beginning as an ACFA judge in 1968 and moving to CFA in 1995. His first pedigreed cat was a seal point Siamese purchased in 1959 in Tokyo, Japan, where he was an instrumental part of the foundation of the cat fancy, organizing the first Japanese CFA club and show back in 1962-1963. His Tsu-Kee-Ah-Kee Cattery was established in 1962 and specializes in silver tabby American Shorthairs. He has also bred and/or exhibited Abyssinians, American Shorthairs, British Shorthairs, Burmese, Colorpoint Shorthairs, Exotics, Persians, Siamese and Turkish Angoras.

In addition to his lengthy judging experience, Bob has served CFA in many other capacities. He has been a part of the Judging Program Committee (focusing on education and training), served as the CFA International Division Liaison for Asia/Latin America from 2006-2010, and is currently the Chair of the International Division Committee, Asia (except China). He has also served several terms as the American Shorthair Breed Council Secretary. Over the years, Bob has judged in nearly 30 different countries and takes pleasure in recording pictures of cats he has selected for Best in Show in his CFA Photo Gallery, which can be seen at www.bobzenda.org.

Bob served on active duty in the US miiitary for 21 years, retiring as an Army Officer in January 1977.  He later served as a Department of Army Civilian for an additional 25 years, responsible for Training & Leader Development of the Army's civilian workforce.