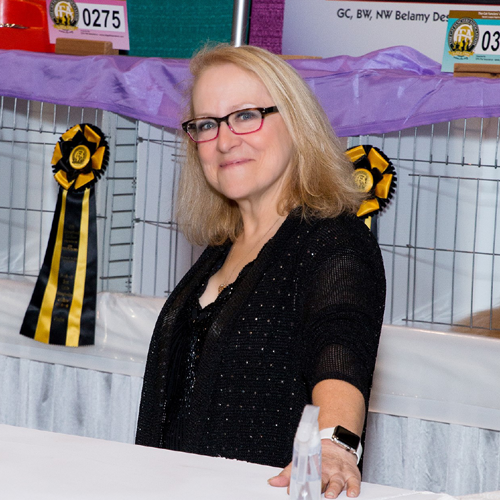 Rachel Anger is from the Detroit, Michigan area and works as a legal assistant for Michigan’s largest law firm.  Rachel’s natural love and appreciation for all animals led her to become a CFA judge in 1994.  Since that time, she has judged across the United States and Canada, as well as in South Africa, New Zealand, Australia, Japan, China, Hong Kong, Kuwait, Russia, Ukraine, Austria, Italy, Belgium, Germany, Holland, Sweden, Indonesia and Thailand. Rachel has appeared in the televised videos The Standard of Perfection and Cat-Minster, and the 2018 Netflix documentary Catwalk: Tales from the Cat Show Circuit. Rachel was honored to be named to the coveted Judges’ Spotlight Award, and has received three Star Awards in recognition of service to the Association.

Rachel looks forward to continuing to serve the cat fancy, both behind the judging stand and at the board table.  Her judging philosophy is to “honor and respect each cat, each exhibitor and each fellow judge”, and through that philosophy has been fortunate enough to develop many life-long friendships. 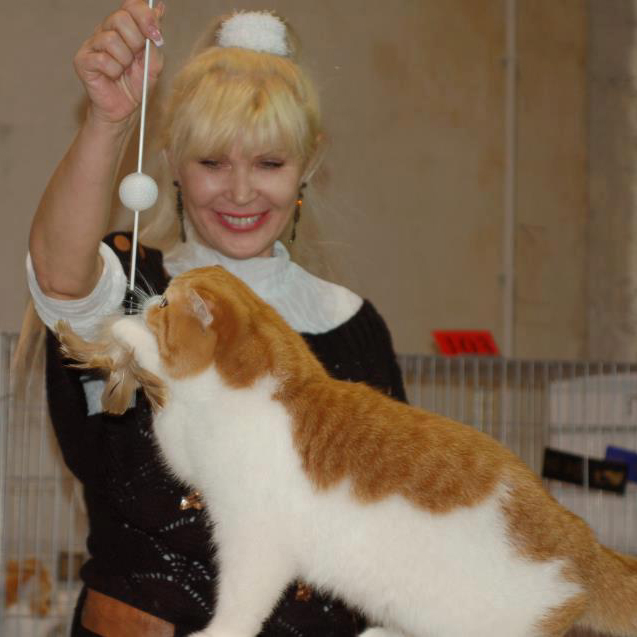 Born in Moscow, where she still lives, Irina began breeding Persians in 1986 and became an allbreed judge for the Russian Feline Federation in 1991. In that same year, she came to the U.S. to visit her first CFA show at the invitation of the late CFA allbreed judge, Vaughn Barber. She studied CFA show rules, standards, even the Clerking Manual. When she returned to Russia, she brought with her a CFA registered black Persian male who became the foundation of her new CFA registered cattery, Kharpers, and the determination to eventually become a CFA judge.

To further her training and expand her knowledge, she began to work with shorthair breeds: Siamese, Orientals, Russian Blues and Cornish Rex. In 1998, she had her first guest judging assignment for CFA, in Moscow. She went on to guest judge more CFA shows in Russia, the Ukraine, Europe, and Asia, eventually joining the CFA judging program as an approved allbreed judge in 2014.
Irina loves so many things about judging: “to follow updates in different breeds and see how they move forward, to handle the best representatives of these breeds on my judging table, to see the happy eyes of the exhibitors, and to discuss different cat problems with breeders and fellow judges to improve my knowledge.” She also loves to travel, experience different countries, and open herself up to new cultures and traditions.

A retired economist, Irina also owned a chocolate shop for 10 years. Her interests outside the cat fancy now include growing flowers and Latin dancing. 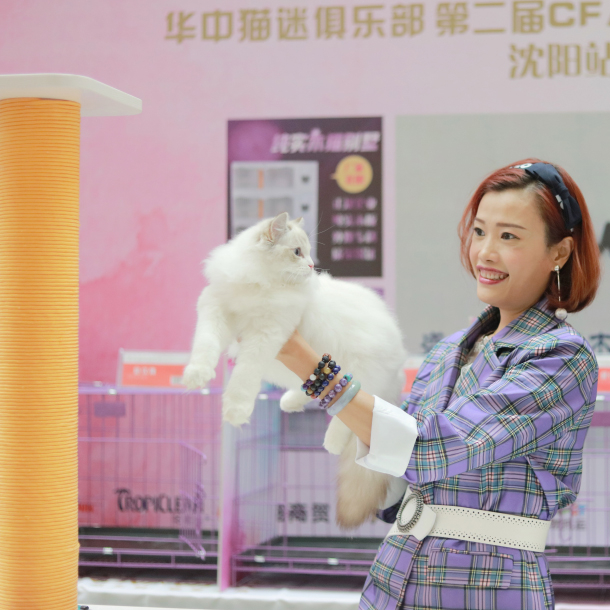 A CFA judge for the past 7 years, Suki began breeding about 20 years ago. Her Tigerboy cattery has focused on Persians and Exotics and she has shown her cats in the U.S., Europe, and Asia, achieving Regional, Division, and National wins.

Suki’s training for the judging program took place throughout the U.S., Europe, and Asia, and she has judged all over Asia. In 2018, she was invited to judge the prestigious Garden State Cat Club show in New Jersey. For Suki, the best part of judging is the opportunity to handle and appreciate beautiful cats and help to promote animal welfare.

Before her recent retirement, Suki managed an IT company that developed stock market trading systems in Hong Kong. She now divides her time between her CFA activities, her family, and cooking. 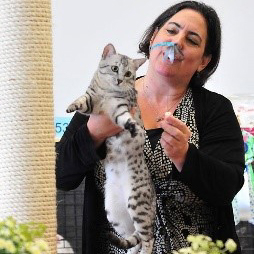 Melanie Morgan is a CFA allbreed judge who began her judging career in 2008.  Since 1995, she has bred and shown CFA registered Egyptian Mau cats under the Emau prefix. Emau is a Level V, Superior Cattery of Distinction. Other breeds she has shown include Persian, Abyssinian, European Burmese, Ragdoll, Maine Coon, Siamese, and Russian Blue. She has been the CFA Egyptian Mau Breed Council Secretary since 2005 and is currently President of both the International Egyptian Mau Society and The Global Egyptian Mau Society clubs.

Melanie has extensive experience in show production, including managing the National Capital Cat Show four times and the Southern Regional Awards show twice.  She is currently a Director At Large on the CFA Board of Directors, has been the Chair of the CFA’s Judging Program and Breeds and Standards committees.  She is very committed to CFA’s future, with a long history of starting and mentoring new Egyptian Mau breeders and exhibitors around the world, and has helped introduce the breed to other associations.

In her “non-cat” life, Melanie retired in 2007 from the Advertising business where she held many roles including Consultant, VP Corporate Broadcast Director and Media Trainer.  Melanie and the cats make their home in Central Virginia. 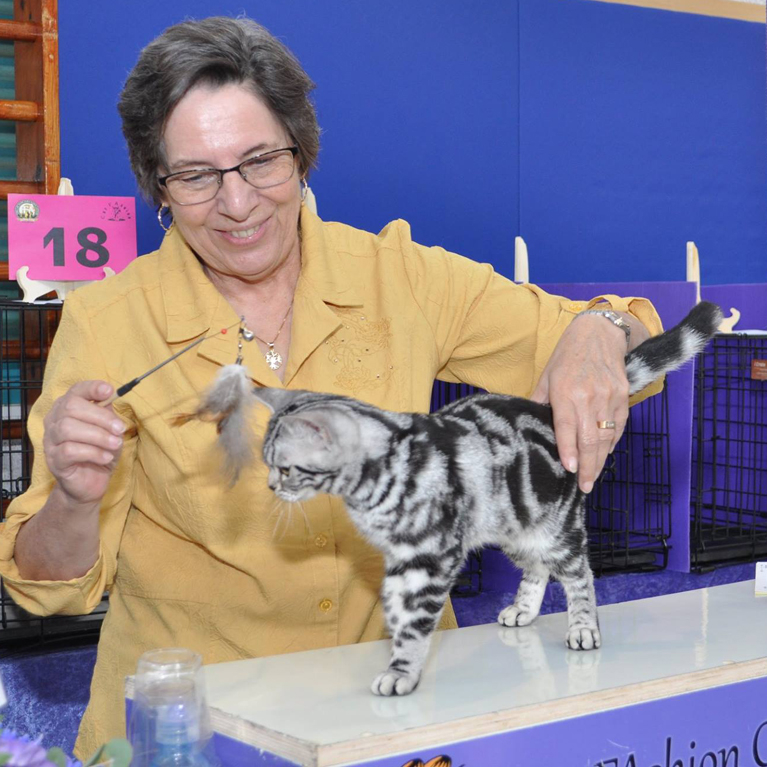 Lorraine and her husband Pierre established Cha-o-P’ya Cattery in 1994. It has always been a small cattery, breeding exclusively Siamese. Due to careful breeding, Lorraine and Pierre have produced two regional winners, seven DM’s and 45 Grand Champion & Premiers.

During her breeding career, Lorraine moved up the ranks ,working as a ring clerk and then as a master clerk. She was accepted into the judging program as a shorthair trainee in 2007. In order to advance in the program, Lorraine knew that she’d have to work with other breeds. So, over the next four years, Lorraine worked with a Chartreux, an American Shorthair, Persians, an Exotic, and a Maine Coon. She also agented an Abyssinian, a Japanese Bobtail and a Birman, showing all these cats to their Grand Champion titles. This experience helped her advance to a double specialty and then an approved allbreed judge.

Lorraine recently retired after 42 years as a financial advisor and mortgage originator in a Montreal bank, She is now free to apply all her energy and dedication to CFA. 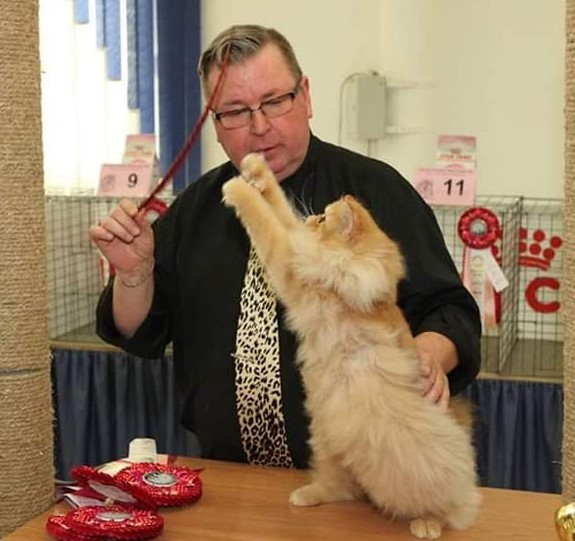 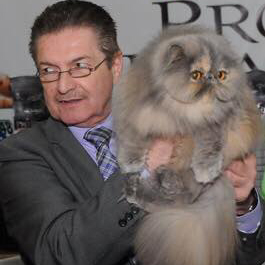 Russell Webb has been breeding since 1990, when his Whiteweb cattery registered its first litter. His began with Cornish Rex and Devon Rex, but subsequently fell in love with Sphynx and currently breeds both Sphynx and Cornish. As Russell became more involved in the cat fancy, he became a clerk, and then a master clerk, and was always fascinated by how the judges worked with the cats. Eventually he applied to the judging program and has now been a judge for 14 years.

He loves judging because it gives him the opportunity to travel, meet new frends all over the world, and handle so many beautiful cats. He has judged throughout the U.S., Europe, and Asia, and guest judged in Canada and Australia. A member of many CFA clubs, he is active in show production and experienced in all aspects of show management. He is also currently serving CFA as the Chair of the China committee within the International Division.

Born in Manhattan, Russell lived there for many years before moving to his current home in New Jersey. He works as an Investment/Payroll Manager on Long Island. When not working or involved with cats and CFA, he enjoys outdoor activities and gardening. 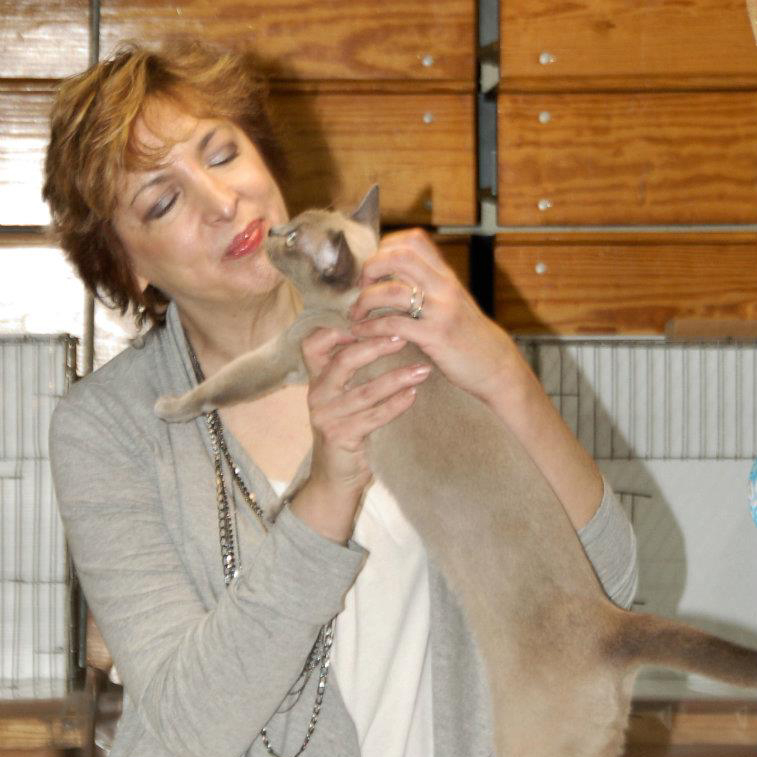 Iris has wanted to judge cats since attending her very first cat show in 1988. But it took a while before she was able to achieve that goal.

She began breeding both Russian Blues and Turkish Angoras in 1990 with her first husband, the late Robert Hoffman, under the cattery name of Silverlock. While working toward the judging program, she participated in all aspects of show production and the clerking program, eventually becoming a master clerk and running clerking schools. After her husband’s death, she phased out the Russian Blues, bred Oriental Longhairs, and showed Persians, Birmans, American Shorthairs, Norwegian Forest Cats, Abyssinians, and Manx. She was first licensed as a judge in 2003.

When Iris met Robert Zinck, now her second husband, and successfully lured him into the cat fancy, they established a new cattery, Folie a Deux (inspired by a French psychological term that refers to a disease/delusion shared by two people). They focused primarily on bicolor Turkish Angoras, and bred two national winners as well as a number of breed and regional winners. In 2008, they began working with Siberians, and have achieved several regional wins with them. The Siberians are now Iris’s primary breed. However, she has recently fallen in love with Japanese Bobtails; it is not yet certain where this will lead her.

Iris is Lead Copy Editor and a Staff Writer for Cat Talk magazine and the chair of CFA’s newly formed Virtual Cat Competition committee. She is also a singer and songwriter and invites anyone interested in her music to check out her YouTube channel. 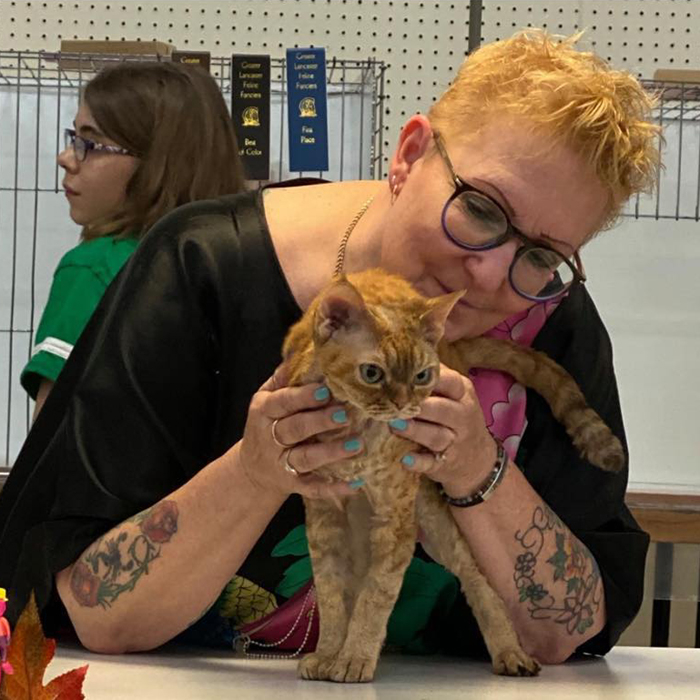 Jeri Zottoli has been a CFA judge for over 25 years, entering the program in 1993.  Her pedigreed cat experience began in 1977 when she registered Euphoria cattery and began breeding Siamese, then Orientals, Burmese and Bombays. She later bred Maine Coons, then fell in love with and bred Birmans for 15 years, serving three years as Breed Council Secretary. Before returning to her much loved Bombays, she also showed other shorthair breeds:  Abyssinian, Cornish Rex, American Shorthair, Japanese Bobtail, and Scottish Folds.

Born in York, PA, Jeri has lived most of her life in Harrisburg, PA.  She is retired from 31 years as a Commonwealth of Pennsylvania employee, mostly as a parole agent/institutional parole agent. Cat judging holds a special place in her heart. “What I like best is those very few rare moments when you have a cat on your judging table that makes you speechless, makes the hair on the back of your arms stand up because you are so taken aback by this cat's beauty.  I love almost all of the cats I judge, but those few very special ones are such a treat.” The judging program has allowed her to travel all over the world, from Japan to Europe, Russia to Australia, Canada and every region in the US. Jeri is most proud of her recent breeding and showing experiences.  “Since I restarted breeding Bombays, I have been blessed with producing the most gorgeous cats ever born in my home, resulting in a number of NWs of cats I bred myself.”